Computers installed in today's 30- to 40-ton hydraulic excavators amplify the many aspects of operation by actually making production decisions. Equipment manufacturers have effectively leveraged the cost-effective capabilities of technology to produce excavators that feature: 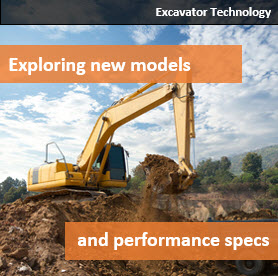 The Environmental Protection Agency's 2003 Tier-II emissions deadline brought engine updates across the 30- to 40-ton excavator class. With their electronic fuel-injection controls, virtually all of the engines are more powerful than engines used in preceding models (up to 19 percent more horsepower). And with the ability to fine-tune fuel injection as the work changes, most of the new engines use in the neighborhood of 10 percent less fuel.

* Monthly ownership cost (based on list price) plus operating expenses, divided by 176 hours

Machine controllers now offer operators the choice of multiple work modes, each designed to assign hydraulic priority to the circuits most critical to production in common excavator jobs. For example, stick and boom get flow priority in the digging mode while the attachment circuit gets priority in attachment mode. The problem with previous generations of excavators is that operators had to be trained to use the right mode at the right time. That seldom happened, and productivity and efficiency suffered when work was done in the wrong modes.

To simplify the choices, many of today's machines offer an Automatic mode. The machine's computer senses system pressure and the operator's lever inputs then adjusts hydraulic priorities automatically to accomplish more efficiently what the operator wants to do.

Sensors in the hydraulic systems integrated with controllers on both the hydraulic pumps and engines have made the power-boost feature common. If the machine's working circuits reach standard relief pressure for more than a second or two in tough digging, the systems automatically boost main pressure about 10 percent for a short period (usually around 10 seconds). Machines can handle the heavier load for short spurts, and the extra power can help push through a tough job. Several manufacturers put a button on the joystick that operators can push to boost power on demand.

The availability of work modes varies by manufacturer:

When you ask manufacturers' excavator product managers which single technology had the greatest impact on their product category over the past 24 months, virtually all of them talk about electronic controls that now do more than just sense conditions. They provide feedback - either at the monitor or in the form of adjustments to hydraulic and engine performance.

It's a sophistication bordering on artificial intelligence that makes the machines more effective and efficient. Electronic systems provide information that improves diagnostic ability and helps owners make the best choices about how to use the machine effectively.

Along with the other electronic improvements, many excavators now include built-in data tracking that records all operating parameters, including:

To simplify management, data can be downloaded easily with a hand-held computer. Once it's uploaded to a personal computer, it can be graphed for easy analysis and used to fine-tune both the machine and the operator as well.

In addition to on-the-job performance, technology is improving durability and ease of service too. For example, today's engines in the 30- to 40-ton excavator class have more heat to dissipate because of intercoolers between turbocharger and cylinder head, so many machines are now cooled by a fan with hydrostatic drive. Responding to information from a thermostat, the engine controller tells the hydrostatic fan drive when to come on and how fast to run. The fan uses only enough power to hold the engine in a safe operating-temperature range. Deere and some others have added an airfoil fan to variable fan drive to save significant horsepower.

It's not a coincidence that there's a service-interval race going on in hydraulic excavators at the same time so much electronic technology is being applied to the machines. Most of the diesel engines in today's excavators are designed for 500-hour oil-change intervals. The engines are working harder than ever. But computer controls have softened the sharp peaks in horsepower demand and they monitor and respond to coolant and oil temperatures and pressures better. New filter technologies are buying time for oil, too.

In the interest of aligning basic service at the same interval as the engine-oil change, manufacturers are applying special metallurgy and seals to bushings and pins in boom, stick and bucket joints to stretch greasing intervals. John Deere and Komatsu excavators are at 500 hours, and all the front-linkage pins except for the bucket joints on Cat and Case machines now require grease only at 1,000-hour intervals.

* Over the end, at 20-foot radius, at ground level

Compare Quotes for Excavators and Save