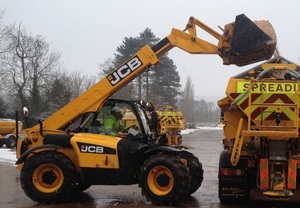 Originating in 1945, JCB got its start when one guy started building agricultural tipping trailers out of his garage. If that scenario strikes a comparison to a computer mega-giant we all know and love, it's entirely justified. Today, JCB is one of the leading manufacturers of rough terrain telehandlers and telescopic booms. A lot of their success can be attributed to the time and resources devoted to development and technology, especially with regard to performance. They recently invested £45 million ($72.1 million) in the production of six cylinder engines.

In a quick "by the numbers", JCB currently maintains a network of 22 plants on four continents, supported by more than 750 dealers and 2,000 dealer locations throughout the world. With a workforce of around 11,000 people, their machines are sold in 150 countries around the globe.

Though the application for each varies dramatically, one common thread is their consistency in design - one that's focused on easy-to-use versatility. For example, the rough terrain line has been manufactured specifically for rehandling applications commonly found within forestry and construction. But they're also equally suited to smaller applications like special events, shipping docks, and scrap yards.

Engineered for high mobility, they feature a robust transmission that permits fast directional changes and enhanced traction on rough terrain. The hydrostatic power steering provides a turning diameter of 14 feet 8 inches and a 43˚ wheel steer angle. Available in two-wheel or four-wheel drive, the tires are also customizable to adapt to a variety of different terrains.

Standard safety equipment and upgrades include:

Shown to enhance the efficiency of their RTFLs (rough terrain forklifts), the JCB Dieselmax engine produces 74 hp (55kW) of output for top speeds of up to 18 mph, as well as low revs to ensure maximum fuel efficiency. As mentioned above, the transmission makes use of an integral torque converter and four-speed synchromesh gearbox. This pairing delivers quick, smooth directional changes and safety through optimum control.

Interestingly, the engine is reportedly so efficient, it complies with Stage IIIB and Tier 4i regulations without the need for an exhaust after-treatment system, according to the manufacturer. The need for a diesel particulate filter (DPF) or selective catalytic reduction (SCR) system is eliminated by the engine's high pressure common rail combustion that injects the fuel at extremely high pressures (up to 29,010 psi / 2000bar). This design has been shown to produce exhaust that's practically free of particulate matter.

Further enhancements to the Dieselmax engine design include:

Compare Quotes for Rough Terrain Forklifts and Save