In the same way automobile owners look to replace gasoline for cars with alternative fuels, warehouse owners should consider fuel cell forklifts for their business. Fuel cells supply electricity using an electrochemical process, without combustion, meaning greenhouse emissions are much lower when compared to fuel-burning engines. Forklifts are charged at stations equipped with hydrogen-based fuel to power machines.

For business owners concerned about the cost/time commitment of using battery-powered lifts, fuel cells are an alternative to explore. Ahead are the facts.

When fuel cell lifts were first introduced to industries on a large scale, much of the funding was government-sourced. Grocery store chains and other large manufacturers participated in what was a study of the benefits of fuel cell forklifts. Among the findings, the benefits in labor time saved for recharging cells appeared most promising. 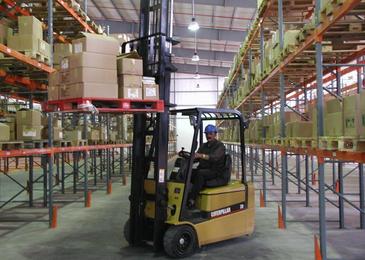 Fuel cells also proved to have a lower maintenance cost than batteries, with a lower net present value. Large companies like Sysco returned to the market to purchase several more fuel cell lifts after the initial rollout.

Currently, Plug Power is one of the leading manufacturers for the technology, working in cooperation with Ballard Power Systems. In addition, Oorja Protonics is manufacturing (and reportedly selling hundreds) of their direct methanol range extenders for forklifts.

Immediate benefits in the workplace

Business owners understand the importance of maintaining safe conditions in the workplace for the short and long term. With fuel cells powering the lifts in a warehouse, you won't have harmful CO2 emissions flooding the air supply. It equates to cleaner air in the workplace and lesser chances of employees experiencing respiratory problems.

A big boost in labor costs

While charging battery-powered lifts can take as long as fifteen minutes, it only takes about 5 minutes to prep fuel cell forklifts for a coming shift. When you add up that savings in the labor cost of charging more than three shifts per lift per day, it makes a huge difference. It's not temporary, either -- fuel cells have a longer life span than batteries.

Studying the cost comparison over the long haul

Fuel cell forklifts are able to boost your company's bottom line, with results that are immediately noticeable and measurable. Fuel cell-based sustainability delivers immediate rewards, each of which has an impact on profitability, including:

In fact, a study conducted by Battelle reported that fuel cell forklifts require between 48% to 50% less investment than battery-powered machines:

Another report includes findings that place fuel cells at 32% to 35% less expensive than battery backup power solutions. This data assumes tax credits in combination with a 10- and 15- year lifecycle and battery replacements every five years. But even without the credits, the fuel cell lifecycle costs still have the potential to be 12% to 18% less expensive.

That said, fuel cells - like many other types of green technology - have significantly higher upfront costs when compared to batteries. To recoup this cost and see a fast ROI, much depends on the scale of your operation.

If you have more than 50 forklifts in your fleet, you are going to see a faster return on investment, with much of it coming in labor time saved during the charging process. Smaller operations will take longer to see ROI.

Since the hydrogen used for fuel cells must be separated from natural gas, this technology is not perfect when it comes to environmental impact. Additionally, it will take longer for smaller companies to see their investment pay off. However, any medium- to large-scale business will benefit by converting to fuel cell technology when powering forklifts.

Compare Quotes for Forklifts and Save