The Ins and Outs of Traditional Health Insurance

For years, traditional health insurance, also know as indemnity or fee-for-service coverage, was the norm. Under this type of health coverage, plan members have total flexibility in choosing doctors, hospitals, and other health care providers. Plan members can go to any specialist without having to get a referral from another physician, and the insurance company doesn't get to decide whether or not the visit is necessary. 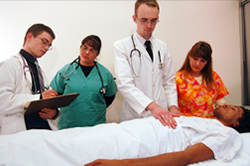 Unfortunately, fee-for-service plans aren't always as great in practice as they are in theory. These days, most employers forgo traditional plans in favor of managed care options like a health maintenance organization (HMO) or preferred provider organization (PPO).

Traditional insurance plans usually involve more out-of-pocket expenses for employees than managed care plans. Often there is a very high deductible, usually starting at $200, before the insurance company starts paying. Once the deductible is paid, the insurer will generally pay about 80 percent of any doctor bills.

And though it's nice to be able to visit any doctor in the world, traditional plan insurers will generally pay only for "reasonable and customary" medical expenses. This means they take into account what other local practitioners charge for similar services. So if it cost a plan member $800 to have his tonsils removed, but other doctors in his area typically charge $600 for the operation, then the insurer is likely to pay only $600 for the operation. This is in addition to the deductible and co-insurance they would be expected to pay.

Costs for you and your employees

In terms of out-of-pocket costs, health insurance can vary depending on how you choose to structure the policy. Deductibles typically range from $200 to $1,000, and co-insurance is usually about 20 percent for the first $2,000 to $10,000.

For a health insurance plan to be successful among your employees, make sure that deductibles and co-insurance do not drastically exceed what your employees can pay. While some co-pays can go as high as 50 percent, be wary of policies that require more than 25 percent of the cost of treatment or those that continue to charge co-insurance for charges in excess of $10,000.

And some policies limit coverage to specific health conditions or set artificially low limits on the maximum payment. Check provisions for long-term illnesses and restrictions for pre-existing health conditions (such as diabetes or asthma). Also make sure the policy offers at least $1 million of coverage, since costs for treating catastrophic illnesses can easily reach these astronomical amounts.

Also, watch out for low reimbursement levels. Some policies pay a set maximum per procedure, which may be far less than what a physician or doctor actually charges. If the claim payment falls short of the bill, the patient can be left paying the difference. To avoid this, you may want to check with a physician to see if reimbursement levels are within the normal billing range.

Compare Quotes for Health Insurance and Save