Full Speed Ahead for Fast-Food Franchisees

New technologies give new promise to the fast food franchise industry. Discover how easy it can be to incorporate cutting-edge developments into your future franchise.

Bojangles' President Tom Lewison has worked in quick service for more than 30 years, and from his point of view, nothing can make a drive-thru more efficient than a good service support system. "That's the root of speed at the drive-thru," he says.

That said, many chains, including Charlotte, N.C.-based Bojangles', have installed speed-inducing technology at drive-thrus and take-out counters. Mere seconds make a difference, says Mark Godward, president of Strategic Restaurant Engineering, a Miami-based food service consulting firm. "If you can cut your window time from 45 seconds to 42 seconds, you're increasing throughput by 10 percent," Godward points out. That three seconds might not mean much to a customer, but to a unit handling 70 cars an hour, it can mean an extra seven cars per hour, Godward explains: "That's a big deal for an operator." 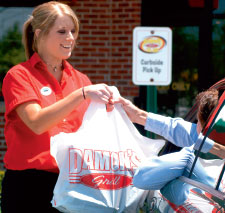 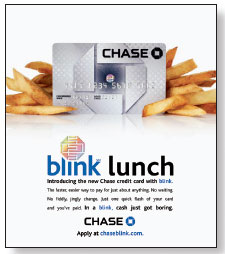 A decade or so ago, many of these technologies were just being developed, and some were still unimaginable. Although years ago these were merely ideas, in the present they are becoming an industry standard. Industry veterans and potential franchisees alike can gain valuable insights from the technological strategy of their contemporaries.

Bojangles' drive-thru has always been busy, accounting for about 55% of sales. After the chain added timing devices to the drive-thrus of its 350 stores, "We're now north of 60 percent," Lewison says.

The timers alert the kitchen that a car is at the drive-thru and then time the wait at the ordering station and the pick-up window. A readout in the kitchen can be programmed with incentives such as a green "fantastic" for a quick job or a yellow "let's hurry." The readouts make it "more fun" to motivate the kitchen, Lewison says.

Installation per store cost between $2,000 and $2,500. Given unit volumes of $1.35 million and the 1 percent hike in volume, "That's a pretty quick return on investment," Lewison says.

Biometric payment systems like PayTango are also being introduced in select restaurants throughout the US, offering customers the convenience of fingerprint identification used to make food purchases. PayTango is advertised to sync all of the cards in a wallet with fingerprint IDs to pay for food and beverages in a six second transaction that is considered "like magic."

How To Incorporate New Technology

To conclude, some benefits of incorporating cutting-edge technology include:

Often, incorporating such technologies is as simple as purchasing units and connecting them to a unit's wireless network. Parent companies offer support, security, and an ever-watchful eye to ensure there are no software issues. Because such technologies are constantly improved and developed, often at no additional cost to the consumer, they have a relatively low operating cost over time.