From the smallest portable units to large stationary models, diesel air compressors have been shown to boost on-site productivity while enabling work crews to function just as easily in the wild as they do in developed locations. Manufactured by leading brands that include Kaeser, Sullair, Ingersoll Rand, and Grainger, they're available in two primary configurations: towable and stationary. 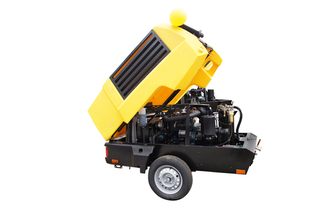 Compressors like the M-Series, produced by Kaeser, are highly portable and designed to be hitched to the back of a truck or work vehicle then driven from location to location. Mounting options range from single-axle and tandem axle to four-wheel steerable. They're commonly powered by a Caterpillar or John Deere diesel engine and come in a variety of outputs that range from 185 to 1600 cfm.

To provide the optimal rate of efficiency, most higher-end manufacturers include a number of efficiency settings that allow the operator to adjust performance variables in real-time, including discharge pressure and temperature, after cooler air temperature, engine speed, and fuel usage.

In contrast, a stationary diesel air compressor can also be moved from one job site to another but does not support the simplicity of a tow package. Models like the P65 to P250 line from Ingersoll Rand are designed with noticeably smaller tanks enabling them to be permanently mounted on a truck or work vehicle. Due to this minimalist design, a utility diesel air compressor tends to weigh less (often between 840 to 2,800 pounds) and includes a full-size door, secured by a padlock, that provides easy access for inspections, maintenance, and service.

Among these two primary types, popular specs include:

In most cases, the work environment will dictate whether you need a diesel or electric compressor. When working in undeveloped areas or on job sites that aren't connected to a city's power grid, a diesel compressor is often the only option. This high degree of mobility is their chief benefit. You're also free of the power losses that often occur on building sites or in locations that have extreme temperatures or weather.

Plus, diesel models typically offer greater horsepower, resulting in higher torque and a greater capacity for adaptability to heavy-duty work conditions. This alone often makes them the preferred choice among construction applications, as electric models tend to cap out at 5 hp.

That said, electric air compressors are estimated to be the more common of the two types - a fact that's largely attributed to their zero emissions operation and increased level of safety with regard to the storage and transportation of fuel. Electric air compressors also provide a high degree of power without the fumes that consign diesel models only for use within open-area locations or work environments with a high degree of ventilation.

Smaller operations and workshops often purchase an electric model for the convenience they provide as well as reported reductions in costs for maintenance and service. Plus, they tend to operate with less noise when compared to an internal combustion engine, further making them well suited to enclosed areas.

Comparing fuel sources, diesel runs about double that of electric:

NOTE: the above prices fluctuate by region and season depending on the cost of diesel fuel and electricity.