Compressed air is often called the "fourth utility" when applied to industrial operations. However, unlike water, gas and electricity the consumer is also typically the producer. Becoming your own compressed air utility provider is as simple as buying an air compressor and installing the air lines and associated support equipment. 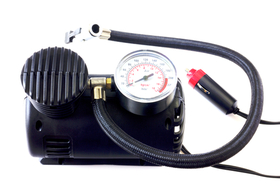 One of the most important parts of producing compressed air is selecting the appropriate type of compressor for the application. Operators have essentially three types of equipment to choose from in fulfilling their compressed air needs, with types further divided into options that include oil-flooded or oil-free, water-cooled or air-cooled, and single-stage or multistage.

With those varieties in mind, the three basic types of air compressors are:

Reciprocating air compressors cover a broad range of output capacity. They are typically found in applications from 1 horsepower (hp) to more than 600 hp. The practical limit for a single stage of reciprocating compressors is typically considered to be 5 to 6 ratios. That is, if intake air is considered to be about 15 PSI(a) the discharge limit from a single stage is about 85 PSI(a). To achieve higher discharge pressures the process is simply repeated in a second compressor piped in series with the first to achieve two-stages of compression.

To ensure that the highest efficiency of compression is achieved an effective seal between the sliding piston and stationary cylinder is required. Although there are commercially available oil-free reciprocating compressors, it is more typical to see lubricated (also referred to as oil-flooded) machines. Introducing lubricating oil into the cylinder reduces the wear between the piston and cylinder wall but has the undesirable effect of mixing and carrying over into the compressed air stream. As a result, if the process using the air is not tolerant of the presence of lubricant in the air, a downstream separator is required to remove the oil from the air stream. Typically, oil separators are sized and selected based upon the end use of the air. That end-use dictates the oil removal rate and efficiency.

From this perspective, compressor availability must be considered. In the case of oil lubricated machines, the significant drawback of the additional cost for oil separation systems and maintenance of those systems to produce air quality acceptable for the required process must be calculated into cost of ownership.

Due to the relatively harsh nature of their inherent operating characteristics reciprocating compressors often require more substantial foundations than the other two types of equipment.

Although not as obvious as reciprocating compressors, rotary screw compressors are also positive displacement compressors. Compression is achieved via the meshing of two helically cut rotor profiles. One rotor is cut as a male profile, and the other as a female profile. These two rotors spin in opposite direction. For the oil flooded configuration, the male rotor drives the female rotor. And for the oil free configuration, the rotors are kept in precise synchronization via a timing gear.

A quick comparison of rotary screw and reciprocating piston compressor stats. For more on this topic, explore this free whitepaper provided by Kaeser.

Through an intake port a charge of air is trapped between the meshing lobes. This trapped volume is squeezed along the axis of the rotor into a decreased volume until it reaches the exit port where it is discharged.

Although usually configured as single stage machines, rotary screw compressors may also be configured for multiple stages of compression. This can be accomplished with multiple screws within a single body, but can also be carried out in two separate bodies.

Oil free rotary screw compressors are also available. They accomplish the sealing between the rotor bodies and outer casing by means of precision machined sealing strips or abradable coating on both the male and female rotors. The wear characteristics of these sealing mechanisms determine the rate of performance deterioration that the compressor will experience over time.

As with reciprocating compressors, rotary screw models also feature the same basic price points, starting around $4,000 to $9,000, with midrange models available for $18,000 to $55,000. Large industrial-grade compressors extend beyond $100,000.

Centrifugal compressors raise the pressure of air by imparting velocity, using a rotating impeller, and converting it to pressure. Each stage of compression in a centrifugal compressor consists of an impeller which rotates and a stationary inlet and discharge section. Air is directed into the "eye" of the spinning impeller through the inlet. The impeller imparts velocity to the air and discharges it into the diffuser where the velocity is converted to pressure.

Each stage of compression can achieve approximately 2.2 up to 3.0 ratios in air service. Due to the heat of compression, interstage cooling is required and can be accomplished through air-to-air or, more commonly, water-to-air cooling.

Centrifugal compressors are oil free. The air flow path and the oil system are independent, separated by seals and an atmospheric air space. Any lubricant required for the bearings or other mechanical components is sealed off from the air stream. This feature has the benefit of not requiring any downstream separation. Centrifugal compressors are ideally suited to processes where uncontaminated air is required for the application.

It's important to evaluate your specific application to determine the best type of compressor to be used. The most accurate method is to calculate the lifecycle cost of the machine. In this calculation, the key factors will be:

If an oil-flooded compressor is being considered, the oil removal system and cost of maintaining the proper filtration must also be included. For a realistic comparison, a total life of 10 years would be a minimum.