In part one of this series, security expert, David Cullen explained the security strategies behind public events like the Boston marathon. The following is part two of the two-part series on the three security lessons we learned from the horrific incident that occurred only a month ago.

Training is Crucial for Security Success

Situations like Boston remind me of how we need to occasionally step back and return to basics. Training is crucial to our success, not only in the corporate world, but individually as well. Think of how fortunate all of the survivors are that trained medical staff was on hand and that the preparations they had in place were right at the critical impact zone.

Well, what if someone had seen the two bombing suspects? What if more people saw the bags being left behind and raised the flag to law enforcement?

That is not to say that anyone is to blame; just the fact that we all get blinded by everything going on around us and forget to focus on what is literally right in front of us.

Learning to protect one’s self and keeping an eye out for danger has been an integral part of life in areas like Israel, where children as young as second graders are taught what to look for. We live in a fast-paced world, and the fact is that most of us have never been trained to focus on details of this magnitude. But what if we were? Could it make a difference in the next event like the Boston Marathon?

We will never know – but it’s worth a shot. 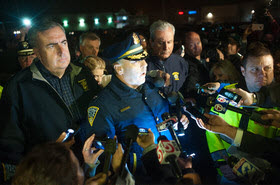 The media and security personnel need to work together to ensure everyone's safety. In this photo, State Police Colonel Timothy Alben speaks to the media on Arsenal Street in Watertown, MA on April 19, 2013. REX Features

The Media Needs to Help

As we all sat and watched the bombing suspects being tracked and captured on live TV, it reminded me of how far we have come in the last 10-15 years; camera's and reporters being imbedded with the military, going on missions and being part of the action of active war zones and more.

This is a common occurrence now and something we have become accustomed with – but is it hurting or helping? I think you could make a claim for either of those depending on the event and your own perspective.

In the case of Boston, we watched it all unfold live from Cambridge to Watertown. I, like thousands of others, was glued to the TV hoping to see the arrests being made. One item, however, that caused great concern for me, was how the broadcasters were showing live coverage of locations the police departments were searching.

While we all want that rush of information, we should all know better than to allow this happen. The bad guys often listen to police scanners and watch TV to protect themselves. All the media did that day was put officers in GREAT harm by showing their locations, identities and plans.

New laws need to be considered to ensure this never happens again, so we don't endanger the lives of those working hard to protect us.

If you enjoyed this series, check out David Cullen’s Spreecast Post Boston Safety Issues, where he sits down and talks about the event with TV journalist, Eszter Vajda.