For businesses looking to make a mark in their industry, hosted phone systems are often a good choice. With the ability to make a business appear larger than it really is, improving customer response, increasing efficiency and boosting the bottom line, it's often a no-brainer. 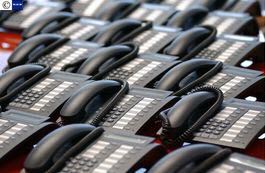 Generally, the business leasing the phone system will receive a router that connects their local network to the hosting company. In some cases, a private link is provided for added security. When a phone makes a call from inside the business, it is connected via the router to the central hosting office, where most of the heavy lifting is done.

If appropriate, the call is transmitted via voice over Internet protocol (VOIP). If calling a traditional phone, the call is routed to the regular phone network. Beyond basic VoIP, cloud-based VoIP hosted phone systems are now available. A service provider will offer hosted phone technology and features that will be managed by a third-party developer "in the cloud." Cloud-based hosted phone features may include simultaneous multi-phone ringing, find me/follow me call forwarding, and conditional call routing.

For many businesses on the lookout for a user-friendly, cost-effective phone system, a hosted phone makes the most sense. A business interested in transferring to a hosted phone can keep their existing phone number without a transfer fee. Just as importantly, a standard hosted business phone can be used to connect multiple offices and may include convenient features like an auto-receptionist to manage virtual extensions and cut down on call wait time.

Pros and cons of a hosted phone system

The biggest advantages for a business leasing a hosted phone system are:

However, there are some downsides to not having your phone system on-site:

There are many standard features that hosted phone system dealers offer, but there are differences. A big one is whether the host will support your phone system being routed over the Internet instead of over a dedicated phone line. For smaller companies, this can be a huge deal, as an existing Internet connection might be perfectly suitable for smaller phone calling needs, but a dedicated connection could add hundreds of dollars to the monthly cost.

And while some hosts charge a per-seat cost of around $19.99 to $39.99, others base their costs on the length of the contract. The ability to obtain lower costs could be enticing, but if you are unhappy with your choice, the lower cost might not be worth the frustration.

But there is a silver lining. Most hosted phone service providers now offer free trials to all interested customers at an average of 30 days. Before you buy, you can test out a 30 day free trial offer at different package levels, ranging from as little as 1000 toll-free minutes per month up to unlimited calling. Taking advantage of a free trial is highly recommended as it will give you the chance to try before you buy, testing service before signing up for a lengthy contract.

Your decision ultimately comes down to trust. Do you trust your business to an outside company? And if so, do you trust that company to deliver on what it promises? If so, a hosted phone system can do wonders.