Dual fuel engines are often the preferred engine type for aerial lifts in the United States, offering the cost-saving ability to combine gas and liquid propane. But diesel and electric models are also enjoying a surge of continuing growth in terms of market share as well, according to some manufacturing sources.

When comparing your options, what it really comes down to is limitations - in particular those related to the expertise of your mechanics (who tend to specialize in certain types of engines), as well as the logistical and health-related concerns specific to your operating environment.

The drive system you'll get will largely be determined by your lifting needs. But if you're in construction, manufacturing, facilities maintenance, or another industry that routinely performs a variety of tasks with aerial lift equipment, you may be able to save a few bucks by pairing the best power source to your applications. You can then use that data to select the proper balance of performance and cost-effective operation.

The list is short, but complete. Look under the hood and the aerial lift motor you'll find will be one of the following four:

While some engines offer clear choices, like those intended exclusively for use indoors, other types attempt to service a range of applications through technological boosts and enhancements geared toward productivity. Some have even tried (successfully) to clean up their act.

Here's how they compare: 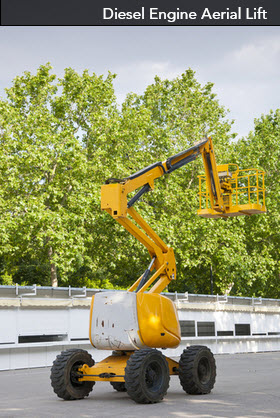 With enhancements resulting from recent EPA regulations, diesel engines are catching on, providing one of the highest levels of performance in combination with cleaner emissions.

In fact, by some estimates, Tier III and Tier IV "clean diesel" engines are as clean if not cleaner than their dual fuel counterparts, offering emission reductions of up to 60% when compared to similar models from 2007, and up to 99% when stacked against models from 2004. Plus, diesels are shown to outlast gasoline-based models as a result of burning oil-based fuel and their practice of firing under compression.

Though a diesel engine is reportedly better in terms of fuel, with prices currently around $4 per gallon, the engines themselves are more expensive, both to purchase and maintain. You can expect to pay at least $5,000 more for a diesel model by some estimates, and thousands more on oil changes, spark plugs, and other routine maintenance over the life of the engine.

When an engine operates in dual fuel mode, it draws natural gas into the intake system, providing a leaner air-to-fuel ratio that takes advantage of one of the world's most economical fuel sources. This technology provides a unique benefit within the aerial lift category, streamlining fuel efficiency in a machine that traditionally has a heavy duty cycle and tends to burn large quantities of fuel.

When considering the dual fuel option, pay close attention to the substitution rate, and know that it varies by load. Though dual fuel engines cannot run solely on natural gas, you want the model that comes as close to it as possible - with a 70% substitution rate representing a good target.

Interesting enough, recent dual fuel engines also outstrip diesel in terms of horsepower, with LP models providing up to 82 hp and diesel lagging behind with an output of only 64 hp in some cases. But when it comes to cost, they may end up pretty even. Though more fuel-efficient than a diesel, the cost of liquid propane is routinely all over the shop, rising and falling depending on seasonal consumption. Recent lows have it at $2.37 per gallon, and a high of $5. 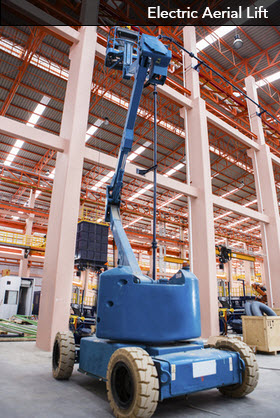 Though the reach of an electric-powered lift is often somewhat limited (common ranges fall between a horizontal outreach of 20' to 44'), an electric lift offers the only emission-free operation in the category. This makes it the popular (and often only) choice for indoor operations. But due to its design, electric models also offer another unique advantage: compact size.

Electric scissor lifts, articulating boom lifts, and toucan mast boom lifts are free of the cumbersome bulk of a combustion engine. Therefore it's not uncommon to find them in widths as narrow as 4' to 8'. This slim design enables them to navigate corridors, aisles, and alleys with far greater maneuverability than other models. Plus, most electric lifts also feature zero tail swing to further minimize the amount of space they take up.

One of the big things to be aware of in this category is battery life. On average, the battery will have to be replaced every 2 to 5 years depending on quality, use, and maintenance. Expect to pay anywhere from $200 to $500 for each battery. Labor can run an additional $300 to $600 in some cases. 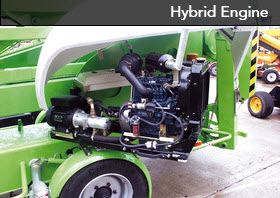 One of the newer innovations within the category, hybrid engines combine the cost-effectiveness of electric operation with the added zap of a diesel-powered generator. Suited to either indoor or outdoor operation, this type of aerial lift uses the generator as an onboard battery charger that delivers enough electrical power to continue using all boom functions even when the battery is depleted - making the hybrid ideal for heavy duty cycles and extended use.

This high level of versatility will also appeal to you if you need to transition between operating environments, in particular outdoor applications without a nearby source of power, and indoor situations that restrict emissions. It's a level of adaptability that is also expected to make this type of design attractive to rental houses as models continue to hit the marketplace mid-2014 and beyond.

As these models are new to the marketplace, there isn't much long-term cost data available. On the whole, it's estimated that hybrid engines are currently about 20% more expensive than their diesel or LP counterparts.

Compare Quotes for Aerial Lifts and Save